beta  We are building a new website. Help us make it better. Provide feedback. Hide this 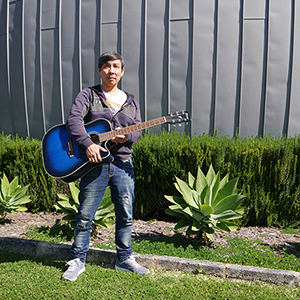 After moving from Vietnam to Australia with his family as a boy, Loc studied chemistry and went on to work in Western Australia’s mining and pharmaceutical industries for more than 21 years.

He first noticed his vision deteriorating after graduating from university and was treated for glaucoma.

Despite this treatment, his vision continued to deteriorate until he was declared legally blind seven years ago.

“It was devastating to lose most of my sight. I wasn’t aware of support services and my rights as an employee – I thought I wouldn’t be able to do my job, so I resigned,” says Loc.

“That was the start of a three-year depression; I was passionate about my work and felt like I had lost my identity.”

Loc was referred to VisAbility; an organisation supporting people with vision impairment in Western Australia to live the life they want, with confidence.

With their help, he has found services such as counselling, leisure activities and domestic support as he regains his independence and relies less on family and friends.

“I would still be in a dark place without this support,” Loc says.
“Now I’m feeling positive and trying to get back the life I thought I’d lost.”

His priority is returning to work, and he has been using the Disability Gateway to search for employment information.

“We live in a world of misinformation, but the Disability Gateway has links to trusted services that can help me get back to work, like assistive technology to help me do my job with impaired vision,” says Loc.

“As a vision-impaired person, the website is clear and simple to follow, and the audio feature is perfect for days when my vision is bad.”

Loc recommends the Disability Gateway to others living with disability and believes a resource like this could have helped him a lot when he was declared legally blind.

The Department of Social Services acknowledges the traditional country throughout Australia on which we gather, live, work and stand. We acknowledge all traditional custodians, their Elders past, present and emerging and we pay our respects to their continuing connection to their culture, community, land, sea and rivers.